The eruption of a volcano can reach the crops of bananas and leave them under a carpet of ash.

Ecuadorian bananas live in a country with one of the world’s largest variety of landscapes. Among them, those of a volcanic nature stand out. Plus, the greatest exponent of the volcanic regions is Galapágos. But, on the continent, volcanoes are also protagonists. Suffice to mention the extensive chain of volcanoes that runs through the Ecuadorian territory. It is so impressive that in 1082 the German geographer Alexander von Humboldt named it the “Avenue of volcanoes”.

Chimborazo, Cotopaxi, Cayambe, Antisana, El Altar, Tungurahua, Rumiñahui, Sangay, Imbabura… these are just a few of the Ecuadorian volcanoes. Some have remained dormant since the Pleistocene, while others have even erupted in the present 21st century. At present, the Geophysical Institute of the National Polytechnic School of Ecuador (IGEPN) lists 27 potentially active volcanoes in Ecuador.

The volcanic origin of a vast territory in Ecuador explains why its soils are so rich and fertile. As the IGEPN clarifies on its website, this is because “volcanoes serve to replenish the earth’s surface with new minerals from the deep regions of the Earth. Therefore, volcanic areas are usually characterized by rich and fertile soils, constantly fed by new mineral inputs, as is the case of Ecuador“.

Thus, although a volcanic eruption entails negative initial consequences, it is a source of fertility for the ground in the longer term.

Which volcano in Ecuador was the latest one to affect banana crops?

It was the Sangay volcano, whose activity affected the banana crops in three regions. It occurred on 20 September 2020. The ash plume rising from its summit reached an elevation of 10 km and moved through the Ecuadorian territory. Since then, the Sangay volcano has remained active. For example, its latest eruption occurred in January and, fortunately, it was less severe. Volcanic activity takes place irregularly and its timing and severity are very difficult to predict.

What happened with these ashes and the bananas?

The ashes were laid down in large quantities on the surface of the leaves, causing obstruction and blocking some vital functions for the plant, such as:

Aside from the leaves, the banana fruit can also be affected by ashes. As the dust falls between the fingers of a cluster, it causes friction on their skin. This may not be detrimental to the proper development of the plant, but it does affect its export. Current quality standards are very demanding regarding the fruit’s appearance (the day will perhaps come when we, as consumers, do not choose a banana for its looks but only for its nutritional value). For this reason, a lot of the bananas affected by ashes were destined for local consumption.

What was done to minimize the negative impact of ashes?

Numerous actions were deployed in the countryside to prevent the banana from being harmed by the ashes.

This natural phenomenon is often foreseen. If so, many producers employ special bags to cover the banana bunches. These bags are called “nun’s necks”. They consist of sheets that are placed between the “hands” (the different tiers of bananas that make up a hanging cluster) of a “bunch” (the hanging cluster) to prevent abrasion. See how in the following drawing: 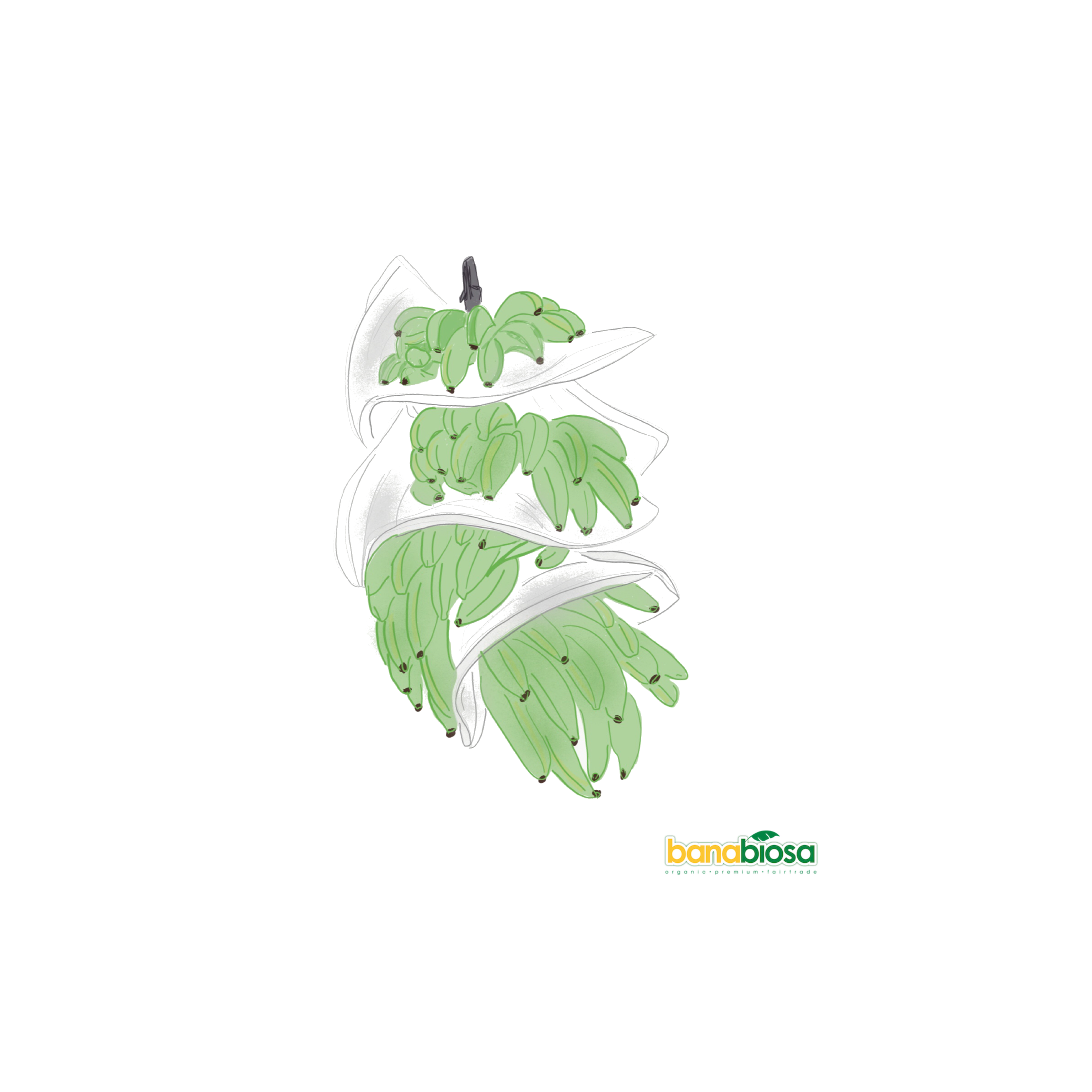 Another action taken was cutting using a step ladder, which reduces the spreading of dust. In normal conditions, when the leaves are not covered with ash, the banana bunches are collected using a knife and a mattress. You can see how this is done in the BananitaBlog videos entitled “Bananas on the runway for take-off“.

Other tips suggested by the Ministry of Agriculture and Livestock (MAGAP) were:

Likewise, associations of banana exporters provided guidance to avoid further damage to crops. This is the case of ACORBANEC, who also shared a list of measures reinforcing the message of public institutions.

So, as we learned from the latest volcanic eruption, the possibility of enjoying a delicious banana involves a large amount of work in the field. Only this ensures their delivery overseas :-).

Curiosity: what’s the origin of the word volcano?

The IGEPN reveals it to us:

“This word has its origin in a Mediterranean island called “Vulcano”, near Sicily. The people who lived there many centuries ago believed that this island was the chimney of Vulcan’s smithy, who was the god of the forge for the Romans at the time. Based on those beliefs, the fragments of incandescent lava and gases from the crater of the island were produced when Vulcan was forging weapons for Mars (god of war) and thunderstorms for Jupiter (king of gods)”.