In 2014 the media reported on a serious threat to the banana plantations in Asia.

On February 27, 2014, The Economist published “Recently, a virulent strain called Foc Tropical Race 4 (TR4) has started to spread from banana plantations in Asia and Australia” (The Economist, Feb 27, 2014 by J.P). One year later, another newspaper said our farewell to the bananas “Bye, bye, bananas” (The Washington Post, by Roberto A. Ferdman, December 4, 2015).

Now, five years later, we, the Cavendish bananas, remain here. Nevertheless, this unexpected progress is certainly not the result of chance, but of the constant work put in by growers and agronomists. Stringent quality control processes are implemented daily. Their target: to ensure good farming conditions and prevent the spread of infectious diseases.

Even today, some areas are still suffering from the impact of this fungus, named Tropical race 4 (TR4). The strain of the fungus Fusarium oxysporum f. sp. cubense (Foc R4T) has caused serious losses in Southeast Asia. On week ago, in Colombia a contingency plan was activated following the suspected outbreak of the disease. TR4 is “spread through infected planting material, infested soil and water”. It “invades the vascular tissue through the roots causing discoloration and wilting, eventually killing the plant” (Source: www.promusa.org).

Therefore, more than ever, a forward-looking adaptation process, one that helps farmers to reduce the chance of getting their farms infected, is the easiest and most effective way to ensure a Long live the bananas! the world over.

But this is certainly not the first time that similar circumstances are besetting us bananas. In the last century, another variety of bananas was replaced by the current ones (you’ve probably read about Gros Michel). But … why this seems to happen again and again, why this alarmism? To understand this well, we must go back over 7000 years.

Original bananas were not a bit like the ones we are today. They were full of hard seeds. Therefore, human ancestors in the Pacific region in Asia, unawares, domesticated bananas mainly from two wild bananas, Musa acuminata and Musa balbisiana. What they did was to transplant the suckers of plants that had fewer seeds and more pulp. This very slow process led to our domestication for edibility. In other words, these farming methods resulted in a genetic modification in nature. Fortunately, we, the new banana plants, were still fertile. But, as we are produced from an existing plant by replanting rhizomes, or suckers that grow out of the mother plants, we are all clones of each other. And here stems the disadvantage for bananas and the great advantage for diseases: any disease can spread easily through the whole plantation.

The largest percentage of bananas sold across the world belong to one subgroup of species genetically nearly identical: the Cavendish.

Why this variety? We are the most popular because of our delicious taste and our thick skin. Our skin allows us to travel from the tropics to other climatic regions under controlled conditions.  Our natural packaging prevents bruising and spoiling during shipping.

Given the above, where this stronger fungal pathogen (TR4) could enter new regions, countries like Ecuador have already set prevention and phytosanitary measures to control the spread of the disease. Ecuador (through its Ministry of Agriculture and Livestock and the Phytosanitary Control Agency, Agrocalidad) is implementing phytosanitary measures to protect crops against the fungus. To work towards this goal, several control procedures have been defined, not only at farms, but also at airports and seaports.

These are some of the measures: 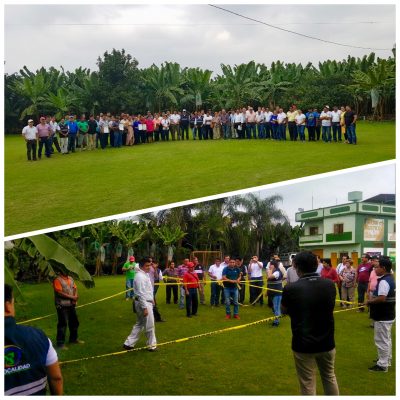 On the website from the Ecuadorian Ministry  of Agriculture,  you can find out more information under the guidance of “Don Musáceo“.

The experience gathered in similar circumstances has led to a stronger international collaboration and more effective local actions. As the Agriculture Minister from Ecuador, Xavier Lazo Guerrero, recently stated.

Once again, we bananas are facing a new challenge.

Fortunately, measures to succeed are already under way with cooperation from all levels, fields and countries.