Skip to content
Previous Next
Enjoying Bananas for Christmas time

As 2018 draws to a close, we look back on it while practising many traditions to celebrate the happy new year. Many of these customs are connected to Christmas.

But did you know that in some regions bananas also play a role in the last holidays of the year?

If you don´t know any banana traditions to celebrate Christmas or the new year, hurry up before 2018 ends to catch up with the most famous ones 😉

At the end of the year, the following long-standing practices involving bananas will take you round the globe, from Portugal to India and right up to the USA.

Gathering your family at the dinner table on Christmas Eve is customary throughout Portugal. But eating a banana before this special dinner is something that only happens in one Portuguese city: Braga.

In Braga, the Christmas season begins with the “Bananeiro”. This is the name given to a tradition that takes place every 24th of December. Its origin goes back to the 1970´s, when the owner of a bananas warehouse, as all good entrepreneurs, was looking for ways to increase his business. This reputed merchant decided to establish a bar next to his warehouse, where his customers could sip the famous Muscatel wine and, to avoid drinking on an empty stomach, he decided to give them all a banana to eat.

This unconventional business initiative received greater momentum when his son decided to bring to the bar all his schoolmates for a Christmas’ toast over a glass of Muscatel wine, accompanied of course by a delicious banana. The people from Braga liked the idea and, since then, eating a banana for Christmas in Braga has become a tradition that everybody can enjoy in “A Casa das Bananas”.

This year you can impress your guests with a probably unknown traditional Christmas dish whose main ingredient is the banana.

Turkey, sea bream, ham, goose, … will be delicately served in many households across the world for Christmas. The majority of such dishes are based on complex recipes that you can find in cookbooks. However, in Kentucky, they bring flavor and color to this holiday get-togethers with an unconventional and easy recipe: banana croquettes.

The reason why bananas became the basis of this unique recipe has to do with its rail-transport during the late 19th and early 20th century. As Ashlie Stevens explains in Louisville National Radio, and according to Kentucky cookbook author Maggie Green, “the United Fruit Company would import bananas from South America into two main ports: New Orleans and Charleston”. “The New Orleans port is the connection to Kentucky because there was a railroad line that went from New Orleans all the way up to Chicago. So, they would load the bananas onto rail cars and head out for Chicago, and they’d have to be put on ice. So, the rail cars would stop in Fulton County, the westernmost tip of Kentucky, where the only icehouse on the route to Chicago was situated. At that time, 75 percent of bananas consumed in the U.S. made a pitstop in Fulton, which explains why they were sold widely there”. 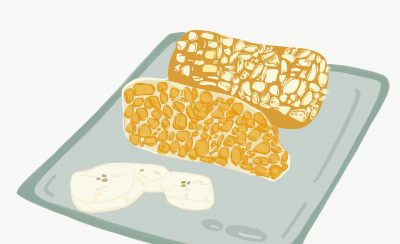 And it is the abundance of bananas in the west of Kentucky that made them famous for Christmas time. Furthermore, this recipe requires only 3 ingredients and 4 cooking steps:

Steps:
1. Peel the bananas and cut them into halves.
2. Slather the bananas with a fine layer of mayonnaise.
3. Roll the bananas in crushed peanuts.
4. Enjoy them the same day.

The last tradition plays with figures. Christmas holidays clearly have a different impact in India than in other countries of the world. However, the huge population of India turns a small percentage of Christians into a large number of people (about 25 million). 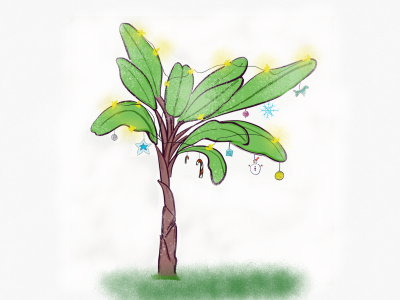 These numbers have taken to the tradition of decorating banana plants or mango trees as Christmas trees. Although, in the case of bananas, they cannot be properly called Christmas trees, as they are actually herbs 😉